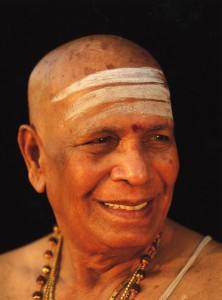 Sri K. Pattabhi Jois (1915-2009), was a great yogi who has passed his knowledge about Ashtanga yoga to students from all over the world. Sri K. Pattabhi Jois was a student from the age of 12 years (1927-1945) of Sri T. Krishnamanacharya famous yoga master of South India and through him he learned the techniques of Vinyasa.

With his master, Sri K. Pattabhi Jois has studied and known Yoga Kurunta, which together have deciphered and analyzed. This ancient manuscript in Sanskrit, contained all the asanas and Ashtanga yoga series and probably is dated back to 2000. C.

Sri K. Pattabhi Jois, as well as working to the daily practice of asanas, yoga has studied in depth in the original Sanskrit texts, as in: Pradeepika Hatha Yoga, Patanjali Yogadarshana and others.
Sri K. Pattabhi Jois, Ashtanga yoga taught in the traditional way, like that in the ancient manuscript.

In 1948 he founded the ‘”Ashtanga Yoga Research Institute” in Mysore with the aim of spreading the practice, the experience and the curative value of yoga as it is described in the ancient manuscripts.

This website uses cookies to improve your experience while you navigate through the website. Out of these, the cookies that are categorized as necessary are stored on your browser as they are essential for the working of basic functionalities of the website. We also use third-party cookies that help us analyze and understand how you use this website. These cookies will be stored in your browser only with your consent. You also have the option to opt-out of these cookies. But opting out of some of these cookies may affect your browsing experience.
Necessary Always Enabled
Necessary cookies are absolutely essential for the website to function properly. This category only includes cookies that ensures basic functionalities and security features of the website. These cookies do not store any personal information.
Non-necessary
Any cookies that may not be particularly necessary for the website to function and is used specifically to collect user personal data via analytics, ads, other embedded contents are termed as non-necessary cookies. It is mandatory to procure user consent prior to running these cookies on your website.
SAVE & ACCEPT